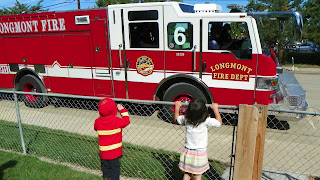 Today marked one of the highlights of Autumn at Bloom! The children were treated to a visit from the Station Six fire fighters, who came to the school as part of our annual unit on fire safety.

While many children revere firefighters, it is not uncommon for some small children to be very frightened of them. As a result, we consider it very important to begin each school year by teaching the children about fire safety. For our youngest children, preschool may be the first time that they have ever seen a fire fighter in uniform or participated in monthly fire drills; for older children, this unit gives them the opportunity to acquire a more sophisticated understanding of fire safety and what to do in the event of an emergency.

We strongly encourage our parent community to use this annual visit as an opportunity to review your own emergency preparedness (to check the batteries in your smoke detectors, review your household evacuation plan with your child, and to reinforce the information conveyed by the fire fighters during their visit). 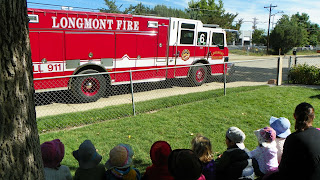 For their part, the children could not have been more excited! Many of the children came to school clasping prized fire engine replicas for show and tell, or clad in full fire fighter costumes, and there was a general sense of euphoria as the children anxiously awaited their arrival and spent the morning running about the yard pretending to put out fires and rescue people.

At last, the engine pulled up alongside the gate!
Fire fighters Travis, Jason, and Roger began by giving a brief presentation about fire safety. The fire fighters taught the children about smoke detectors, how to activate 9-1-1 (and only to use it in an emergency), what to do in the event of a fire (they were told to go outside and wait for their parents at their family meeting spot),what to do if they found matches or lighters (to leave them alone, get an adult, and ask the adult to store them somewhere safe), how to avoid smoke inhalation by crawling outside if necessary, and, in the event of a fire at night, to touch their bedroom door to determine whether it is hot before exiting (if it were to be hot, children were told to stay in their room with the door closed, open their bedroom window, and call for help).

As part of the presentation, Firefighter Travis offered several important tips for parents as well: 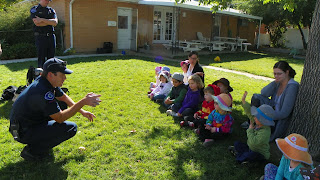 The children listened to the presentation with rapt attention, and asked some great questions (What kind of fire engine was the truck? What made them want to become firefighters? What should they do if smoke comes under their bedroom door?). The firefighters were notably impressed with their attentiveness and intelligence (initially, they had expressed that children this age might be too young to understand 9-1-1 and detailed evacuation information, but after a few minutes of interacting with the children they decided that they could handle the full elementary presentation). 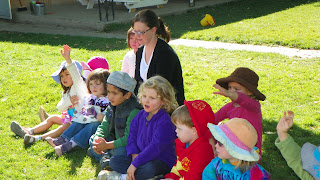 It is very important that young children learn not to be frightened of firefighters and to recognize them as people who are there to help them. Due to their bulky uniform, mask, and the distortion of their voice due to their oxygen tank, firefighters can seem very frightening to small children and, unfortunately, there have been several very sad instances where children run or hide from the very people who are there to help them. As a result, in what I consider the most important element of these visits, Fighter fighter Roger dressed in full regalia in front of the children (on a day which got up to 80 degrees) so that they could see that what might appear to be a frightening figure, is merely a person dressed in a special uniform.

The children learned that firefighters keep their clothes ready at hand so they can just step into their boots and pull up their pants. 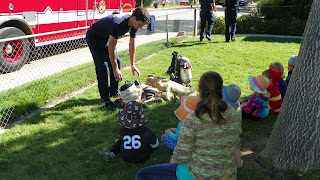 They got to see their self-contained breathing apparatus, hear the sounds that it makes, and how it distorts the fire fighter's voice. 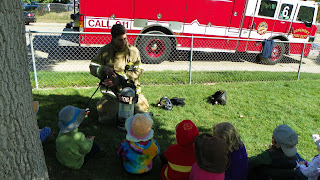 And, they got to come up and verify that beneath all of that thick, flame-retardant clothing, the kind and obliging Firefighter Roger was still safely sweating inside (just in case they had any doubts). 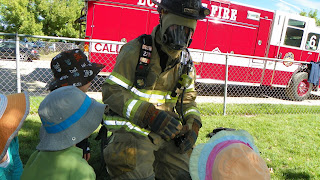 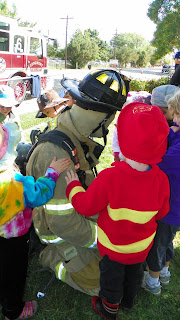 Then it was time for the highlight of the children's day... the tour of the fire engine! 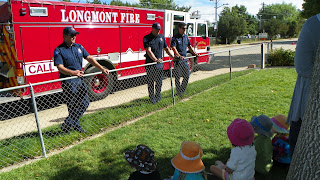 Our obliging guests opened every nook and cranny of the fire engine so our curious little brood could peek inside. They fielded questions about how they cut cars apart, where they each sit int he fire engine, and numerous tales of the children's encounters with fire engines. 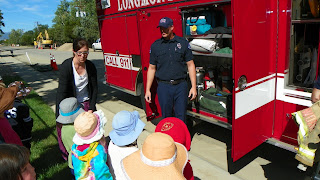 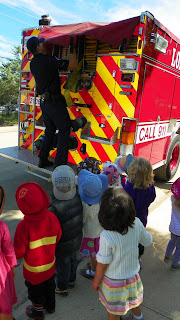 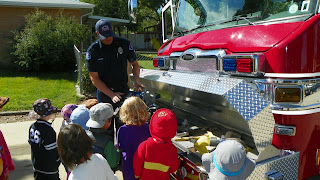 The firefighters also gave the children an exciting demonstration of how the lights work and how the siren sounds. 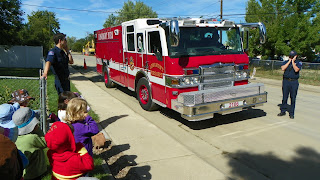 Finally, they awarded the children their Junior Firefighter badges, and allowed them to resume playing firefighter in the yard until lunch time. The industrious children busied themselves with fashioning sandbox buckets into helmets, making sifters into oxygen masks, organizing their tools in the fire station, and saving their beloved chickens from multiple fires in the chicken coop. 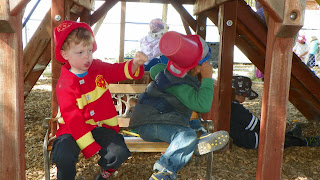 We would sincerely like to thank Firefighters Travis, Jason, and Roger of Station Six for their incredible patience, enthusiasm, and kindness. We really appreciate their willingness to take time out of their day to educate the children about fire safety and for their service to our community.

Posted by Abigail Miller at 4:40 PM No comments: